What did you want to be when you were growing up? An astronaut? A ballerina? A fireman? Amazingly, by about 3rd or 4th grade, Dr. Jeff Martin knew he wanted to be a dentist. His interest was sparked largely because he really liked his own childhood dentist, Dr. Rooney.

Dr. Martin describes his childhood as a happy one. Although his biological father left when he was very young, Jeff’s mom remarried a wonderful man with two daughters of his own. Roger Martin adopted Jeff and his sister when Jeff was about 6 years old, and is the man Jeff Martin calls Dad. Some of his favorite memories are the car trips his family, including the two family dogs, took all over the United States. 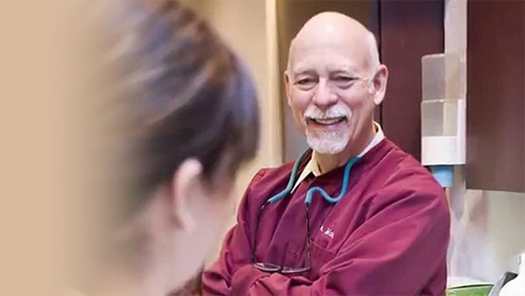 Growing up, Jeff was a good student. Education was a strongly held value in his family. Jeff also believes the small class sizes in his grammar school practically provided him with a private education.

Jeff Martin was also an avid athlete. Because there was no high school in Inspiration, he had to attend high school in Miami, AZ where he played baseball, was the football quarterback, and ran track. He was also an Eagle Scout and he loved to hike and camp.

After high school Dr. Martin attended the University of Arizona where he obtained his bachelor’s degree in biology and met his lovely wife, Kathy. He then attended dental school at Baylor University in Texas, the same school his mentor Dr. Rooney had attended. While in dental school, Dr. Martin also moonlighted as a phlebotomist.

After completing school, Jeff and Kathy Martin returned to Tucson where Dr. Martin began his practice in 1978. They have two daughters, Kasey and Holly. Their daughters are now married  and Jeff and Kathy have 5 grandchildren. All of their children and grandchildren live nearby, so the Martins get to spend a lot of time with their family which is so important to them. In fact, their daughter Kasey married Will Taylor, who is now Dr. Martin’s partner!